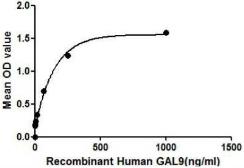 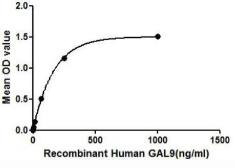 GAL9 (Galectin-9) belongs to the galectin family, which is defined by their binding specificity for β-galactoside sugars, such as N-acetyllactosamine (Galβ1-3GlcNAc or Galβ1-4GlcNAc). It is reported that GAL9 induces T-helper type 1 lymphocyte (Th1) death by binding to HAVCR2 (Hepatitis A virus cellular receptor 2); besides, the interaction between GAL9 and PDI (Protein disulfide-isomerase) leads to disulfide reductase activity increasing at the plasma membrane, therefore alters the plasma membrane redox state and enhances cell migration. Thus a binding ELISA assay was conducted to detect the interaction of recombinant human GAL9 with recombinant human HAVCR2 and recombinant human PDI separately. Briefly, GAL9 were diluted serially in PBS, with 0.01% BSA (pH 7.4). Duplicate samples of 100 μl were then transferred to HAVCR2-coated and PDI-coated microtiter wells and incubated for 2h at 37ºC. Wells were washed with PBST and incubated for 1h with anti-GAL9 pAb, then aspirated and washed 3 times. After incubation with HRP labelled secondary antibody, wells were aspirated and washed 3 times. With the addition of substrate solution, wells were incubated 15-25 minutes at 37ºC. Finally, add 50 μl stop solution to the wells and read at 450nm immediately. The binding activity of GAL9 with HAVCR2 and PDI were shown in images, and this effect was in a dose dependent manner.

The galectins are a family of beta-galactoside-binding proteins implicated in modulating cell-cell and cell-matrix interactions. The protein encoded by this gene is an S-type lectin. It is overexpressed in Hodgkin's disease tissue and might participate in the interaction between the H&RS cells with their surrounding cells and might thus play a role in the pathogenesis of this disease and/or its associated immunodeficiency. Multiple alternatively spliced transcript variants have been found for this gene. [provided by RefSeq, Jul 2008]
Show More +

There are currently no references for Human Galectin 9 protein, His and GST tag (GTX00111-pro). Be the first to share your publications with this product.
Submit a Reference

There are currently no reviews for Human Galectin 9 protein, His and GST tag (GTX00111-pro). Be the first to share your experience with this product.
Submit a Review