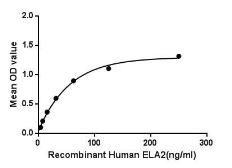 Elastase2 (ELA2), elastase 2 is a serine proteinase in the same family as chymotrypsin and has broad substrate specificity. Secreted by neutrophils and macrophages during inflammation, it destroys bacteria and host tissue. The neutrophil form of elastase is 218 amino acids long, with two asparagine-linked carbohydrate chains (see glycosylation). Neutrophil elastase may play a role in degenerative and inflammatory diseases by its proteolysis of collagen-IV and elastin of the extracellular matrix. This protein degrades the outer membrane protein A (OmpA) of E. coli as well as the virulence factors of such bacteria as Shigella, Salmonella and Yersinia. Besides, Collagen Type XVII (COL17) has been identified as an interactor of ELA2, thus a binding ELISA assay was conducted to detect the interaction of recombinant human COL17 and recombinant human ELA2. Briefly, ELA2 were diluted serially in PBS, with 0.01% BSA (pH 7.4). Duplicate samples of 100 μl were then transferred to COL17-coated microtiter wells and incubated for 2h at 37ºC. Wells were washed with PBST and incubated for 1h with anti-ELA2 pAb, then aspirated and washed 3 times. After incubation with HRP labelled secondary antibody, wells were aspirated and washed 3 times. With the addition of substrate solution, wells were incubated 15-25 minutes at 37ºC. Finally, add 50 μl stop solution to the wells and read at 450nm immediately. The binding activity of ELA2 and COL17 was in a dose dependent manner.

Elastases form a subfamily of serine proteases that hydrolyze many proteins in addition to elastin. Humans have six elastase genes which encode structurally similar proteins. The encoded preproprotein is proteolytically processed to generate the active protease. Following activation, this protease hydrolyzes proteins within specialized neutrophil lysosomes, called azurophil granules, as well as proteins of the extracellular matrix. The enzyme may play a role in degenerative and inflammatory diseases through proteolysis of collagen-IV and elastin. This protein also degrades the outer membrane protein A (OmpA) of E. coli as well as the virulence factors of such bacteria as Shigella, Salmonella and Yersinia. Mutations in this gene are associated with cyclic neutropenia and severe congenital neutropenia (SCN). This gene is present in a gene cluster on chromosome 19. [provided by RefSeq, Jan 2016]
Show More +

There are currently no references for Human Neutrophil elastase protein (active) (GTX00217-pro). Be the first to share your publications with this product.
Submit a Reference

There are currently no reviews for Human Neutrophil elastase protein (active) (GTX00217-pro). Be the first to share your experience with this product.
Submit a Review
Promotion