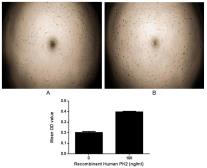 Prokineticin 2 (PK2) is a memeber of prokineticin family. Prokineticin is a secreted protein that potently contracts gastrointestinal smooth muscle. They are thought to be involved in several important physiological processes like neurogenesis, tissue development, angiogenesis, and nociception. Other important physiological roles the Bv8/Prokineticins (PKs) are involved in may include cancer, reproduction, and regulating physiological functions that influence circadian rhythms like hormone secretion, ingestive behaviors, and the sleep/wake cycle. To test the effect of PK2 on cell proliferation, HCT116 colon cancer cells were seeded into triplicate wells of 96-well plates at a density of 5000 cells/well and allowed to attach, replaced with serum-free overnight, then the medium was replaced with 2% serum standard DMEM containing various concentrations of recombinant human PK2. After incubated for 96h, cells were observed by inverted microscope and cell proliferation was measured by Cell Counting Kit-8 (CCK-8). Briefly, 10 μl of CCK-8 solution was added to each well of the plate, then the absorbance at 450nm was measured using a microplate reader after incubating the plate for 1-4 hours at 37ºC. Proliferation of HCT116 cells after incubation with PK2 for 96h observed by inverted microscope.

This gene encodes a protein expressed in the suprachiasmatic nucleus (SCN) circadian clock that may function as the output component of the circadian clock. The secreted form of the encoded protein may also serve as a chemoattractant for neuronal precursor cells in the olfactory bulb. Proteins from other vertebrates which are similar to this gene product were isolated based on homology to snake venom and secretions from frog skin, and have been shown to have diverse functions. Mutations in this gene are associated with Kallmann syndrome 4. Multiple transcript variants encoding different isoforms have been found for this gene. [provided by RefSeq, Jul 2008]
Show More +

There are currently no references for Human Prokineticin 2 protein, His tag (active) (GTX00253-pro). Be the first to share your publications with this product.
Submit a Reference

There are currently no reviews for Human Prokineticin 2 protein, His tag (active) (GTX00253-pro). Be the first to share your experience with this product.
Submit a Review
Newsletter