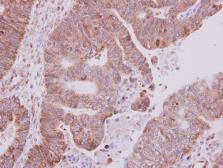 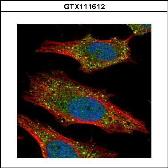 0.65 mg/ml (Please refer to the vial label for the specific concentration.)

Recombinant protein encompassing a sequence within the center region of human Akt2. The exact sequence is proprietary.

This gene is a putative oncogene encoding a protein belonging to a subfamily of serine/threonine kinases containing SH2-like (Src homology 2-like) domains. The gene was shown to be amplified and overexpressed in 2 of 8 ovarian carcinoma cell lines and 2 of 15 primary ovarian tumors. Overexpression contributes to the malignant phenotype of a subset of human ductal pancreatic cancers. The encoded protein is a general protein kinase capable of phophorylating several known proteins. [provided by RefSeq]
Show More +

There are currently no reviews for AKT2 antibody (GTX111612). Be the first to share your experience with this product.
Submit a Review
Application Reference
Vazquez-Mellado MJ et al. Life Sci 2015; 137 (Epub):142-9 erythropoietin protects neuroblastoma cells against * and * by activating erk and akt pathways but has no effect in kidney cells.
Application : WB
Reactivity : Human