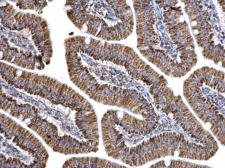 0.82 mg/ml (Please refer to the vial label for the specific concentration.)

Recombinant protein encompassing a sequence within the center region of human Aconitase 2. The exact sequence is proprietary.

The protein encoded by this gene belongs to the aconitase/IPM isomerase family. It is an enzyme that catalyzes the interconversion of citrate to isocitrate via cis-aconitate in the second step of the TCA cycle. This protein is encoded in the nucleus and functions in the mitochondrion. It was found to be one of the mitochondrial matrix proteins that are preferentially degraded by the serine protease 15(PRSS15), also known as Lon protease, after oxidative modification. [provided by RefSeq]
Show More +