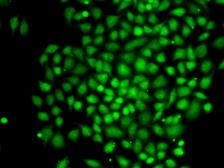 CCCTC-binding factor (CTCF), an 11-zinc-finger factor involved in gene regulation, utilizes different zinc fingers to bind varying DNA target sites. CTCF forms methylation-sensitive insulators that regulate X-chromosome inactivation. This gene is a paralog of CTCF and appears to be expressed primarily in the cytoplasm of spermatocytes, unlike CTCF which is expressed primarily in the nucleus of somatic cells. CTCF and the protein encoded by this gene are normally expressed in a mutually exclusive pattern that correlates with resetting of methylation marks during male germ cell differentiation. Multiple alternatively spliced transcript variants encoding different isoforms have been found for this gene. [provided by RefSeq, Jun 2012]
Show More +

There are currently no references for BORIS antibody (GTX32476). Be the first to share your publications with this product.
Submit a Reference

There are currently no reviews for BORIS antibody (GTX32476). Be the first to share your experience with this product.
Submit a Review
Newsletter