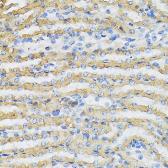 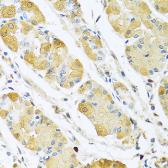 This gene encodes a member of a superfamily of proteins composed predominantly of tandemly arrayed short consensus repeats of approximately 60 amino acids. A single, unique beta-chain encoded by this gene assembles with seven identical alpha-chains into the predominant isoform of C4b-binding protein, a multimeric protein that controls activation of the complement cascade through the classical pathway. C4b-binding protein has a regulatory role in the coagulation system also, mediated through the beta-chain binding of protein S, a vitamin K-dependent protein that serves as a cofactor of activated protein C. The genes encoding both alpha and beta chains are located adjacent to each other on human chromosome 1 in the regulator of complement activation gene cluster. Alternative splicing gives rise to multiple transcript variants. [provided by RefSeq, Jul 2008]
Show More +

There are currently no references for C4 binding protein B antibody (GTX33051). Be the first to share your publications with this product.
Submit a Reference

There are currently no reviews for C4 binding protein B antibody (GTX33051). Be the first to share your experience with this product.
Submit a Review