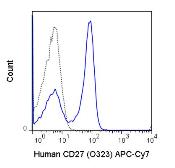 The O323 antibody reacts with human CD27 (TNFRSF7), a cell surface homodimer of ≥ 55 kDa subunits, which provides co-stimulatory signaling in support of the T cell (TCR) and B cell (BCR) receptors. By comparison with CD28, whose TCR co-stimulatory signal can trigger cell proliferation, CD27 signaling appears to promote cell survival and differentiation to effector / memory stages. Also in contrast with CD28, the CD27 receptor may be shed following interaction with its ligand CD70, which is typically expressed on activated dendritic cells, T cells and B cells. With respect to B cells, CD27 is considered to be a phenotypic marker for memory B cells. CD27 has been included within a group of phenotypic markers for identifying human B regulatory cells (Bregs), a cell type proposed to regulate CD4+ T cell proliferation and Foxp3 / CTLA-4 expression in Treg cells. The O323 antibody may be used for analysis of CD27 expression on peripheral T cells, and is frequently used in combination with antibodies for IgD and IgM to distinguish naïve vs. memory B cell populations. For identification of Breg cells, this antibody has been used in combination with antibodies for CD25, CD1d, IL-10 and TGF-beta. The antibody is also reported for cross-reactivity with Baboon, Cynomolgus and Rhesus CD27.

Store as concentrated solution. Centrifuge briefly prior to opening vial. Store at 4ºC. DO NOT FREEZE. Protect from light.

0.025 mg/ml (Please refer to the vial label for the specific concentration.)

The protein encoded by this gene is a member of the TNF-receptor superfamily. This receptor is required for generation and long-term maintenance of T cell immunity. It binds to ligand CD70, and plays a key role in regulating B-cell activation and immunoglobulin synthesis. This receptor transduces signals that lead to the activation of NF-kappaB and MAPK8/JNK. Adaptor proteins TRAF2 and TRAF5 have been shown to mediate the signaling process of this receptor. CD27-binding protein (SIVA), a proapoptotic protein, can bind to this receptor and is thought to play an important role in the apoptosis induced by this receptor. [provided by RefSeq, Jul 2008]
Show More +