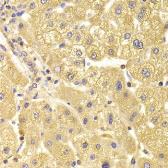 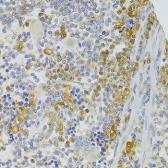 This gene encodes a protein involved in regulating responses to cytokines by members of the Rel/NF-kappaB transcription factor family. These factors play a central role in innate immunity in response to pathogens, inflammatory signals and stress. This gene product interacts with TRAF proteins (tumor necrosis factor receptor-associated factors) and either I-kappaB kinase or MAP kinase to activate either NF-kappaB or Jun kinase. Several alternative transcripts encoding different isoforms have been identified. Another transcript, which does not encode a protein and is transcribed in the opposite orientation, has been identified. Overexpression of this transcript has been shown to reduce expression of at least one of the protein encoding transcripts, suggesting it has a regulatory role in the expression of this gene. [provided by RefSeq, Aug 2009]
Show More +

There are currently no reviews for CIKS antibody (GTX33095). Be the first to share your experience with this product.
Submit a Review
Application Reference
Pei-Ying Li et al. RSC Adv. 2018; 8:31515-31528 Alpinumisoflavone attenuates lipopolysaccharide-induced acute lung injury by regulating the effects of anti-oxidation and anti-inflammation both in vitro and.
Application : WB
Reactivity : Mouse
Newsletter