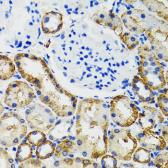 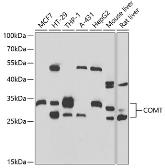 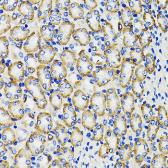 Catechol-O-methyltransferase catalyzes the transfer of a methyl group from S-adenosylmethionine to catecholamines, including the neurotransmitters dopamine, epinephrine, and norepinephrine. This O-methylation results in one of the major degradative pathways of the catecholamine transmitters. In addition to its role in the metabolism of endogenous substances, COMT is important in the metabolism of catechol drugs used in the treatment of hypertension, asthma, and Parkinson disease. COMT is found in two forms in tissues, a soluble form (S-COMT) and a membrane-bound form (MB-COMT). The differences between S-COMT and MB-COMT reside within the N-termini. Several transcript variants are formed through the use of alternative translation initiation sites and promoters. [provided by RefSeq, Sep 2008]
Show More +

There are currently no references for COMT antibody (GTX33108). Be the first to share your publications with this product.
Submit a Reference

There are currently no reviews for COMT antibody (GTX33108). Be the first to share your experience with this product.
Submit a Review
Newsletter