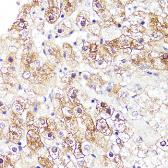 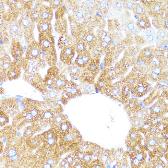 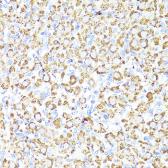 Store as concentrated solution. Centrifuge briefly prior to opening vial. Store at 4ºC.

This gene encodes a member of the cytochrome P450 superfamily of enzymes. The cytochrome P450 proteins are monooxygenases that catalyze many reactions involved in drug metabolism and synthesis of cholesterol, steroids and other lipids. This protein localizes to the endoplasmic reticulum and its expression is induced by glucocorticoids and some pharmacological agents. This enzyme is involved in the metabolism of approximately half the drugs in use today, including acetaminophen, codeine, cyclosporin A, diazepam and erythromycin. The enzyme also metabolizes some steroids and carcinogens. This gene is part of a cluster of cytochrome P450 genes on chromosome 7q21.1. Previously another CYP3A gene, CYP3A3, was thought to exist; however, it is now thought that this sequence represents a transcript variant of CYP3A4. Alternatively spliced transcript variants encoding different isoforms have been identified. [provided by RefSeq, Feb 2011]
Show More +

There are currently no references for CYP3A4 antibody (GTX53947). Be the first to share your publications with this product.
Submit a Reference

There are currently no reviews for CYP3A4 antibody (GTX53947). Be the first to share your experience with this product.
Submit a Review