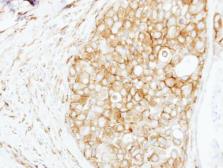 Carrier-protein conjugated synthetic peptide encompassing a sequence within the N-terminus region of human Cortactin. The exact sequence is proprietary.

This gene is overexpressed in breast cancer and squamous cell carcinomas of the head and neck. The encoded protein is localized in the cytoplasm and in areas of the cell-substratum contacts. This gene has two roles: (1) regulating the interactions between components of adherens-type junctions and (2) organizing the cytoskeleton and cell adhesion structures of epithelia and carcinoma cells. During apoptosis, the encoded protein is degraded in a caspase-dependent manner. The aberrant regulation of this gene contributes to tumor cell invasion and metastasis. Two splice variants that encode different isoforms have been identified for this gene. [provided by RefSeq]
Show More +