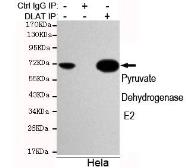 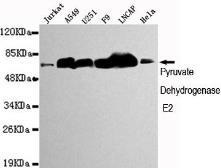 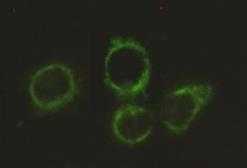 This gene encodes component E2 of the multi-enzyme pyruvate dehydrogenase complex (PDC). PDC resides in the inner mitochondrial membrane and catalyzes the conversion of pyruvate to acetyl coenzyme A. The protein product of this gene, dihydrolipoamide acetyltransferase, accepts acetyl groups formed by the oxidative decarboxylation of pyruvate and transfers them to coenzyme A. Dihydrolipoamide acetyltransferase is the antigen for antimitochondrial antibodies. These autoantibodies are present in nearly 95% of patients with the autoimmune liver disease primary biliary cirrhosis (PBC). In PBC, activated T lymphocytes attack and destroy epithelial cells in the bile duct where this protein is abnormally distributed and overexpressed. PBC enventually leads to cirrhosis and liver failure. Mutations in this gene are also a cause of pyruvate dehydrogenase E2 deficiency which causes primary lactic acidosis in infancy and early childhood
Show More +

There are currently no references for DLAT antibody [4A4-B6-C10] (GTX49202). Be the first to share your publications with this product.
Submit a Reference

There are currently no reviews for DLAT antibody [4A4-B6-C10] (GTX49202). Be the first to share your experience with this product.
Submit a Review