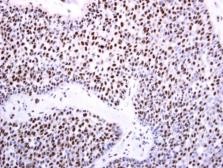 Recombinant protein encompassing a sequence within the N-terminus region of human DNMT3B. The exact sequence is proprietary.

CpG methylation is an epigenetic modification that is important for embryonic development, imprinting, and X-chromosome inactivation. Studies in mice have demonstrated that DNA methylation is required for mammalian development. This gene encodes a DNA methyltransferase which is thought to function in de novo methylation, rather than maintenance methylation. The protein localizes primarily to the nucleus and its expression is developmentally regulated. Mutations in this gene cause the immunodeficiency-centromeric instability-facial anomalies (ICF) syndrome. Six alternatively spliced transcript variants have been described. The full length sequences of variants 4 and 5 have not been determined. [provided by RefSeq]
Show More +