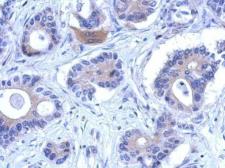 Recombinant protein encompassing a sequence within the center region of human ENOSF1. The exact sequence is proprietary.

This gene was originally identified as a naturally occurring antisense transcript to the human thymidylate synthase gene. Alternate splice variants have been described, one of which (named rTSalpha) represents an alternate 3'UTR that is complementary to the 3'UTR and terminal intron of the thymidylate synthase (TS) RNA and down-regulates TS expression. Another transcript variant (named rTSalpha) does not overlap the TS locus. The function of this gene appears to be primarily to regulate expression of the TS locus both via the antisense transcript as well as through the encoded proteins. [provided by RefSeq]
Show More +