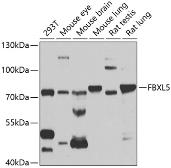 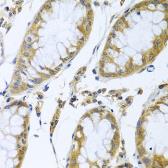 This gene encodes a member of the F-box protein family which is characterized by an approximately 40 amino acid motif, the F-box. The F-box proteins constitute one of the four subunits of ubiquitin protein ligase complex called SCFs (SKP1-cullin-F-box), which function in phosphorylation-dependent ubiquitination. The F-box proteins are divided into 3 classes: Fbws containing WD-40 domains, Fbls containing leucine-rich repeats, and Fbxs containing either different protein-protein interaction modules or no recognizable motifs. The protein encoded by this gene belongs to the Fbls class and, in addition to an F-box, contains several tandem leucine-rich repeats. Alternatively spliced transcript variants have been described for this locus. [provided by RefSeq, Aug 2010]
Show More +

There are currently no references for FBXL5 antibody (GTX32599). Be the first to share your publications with this product.
Submit a Reference

There are currently no reviews for FBXL5 antibody (GTX32599). Be the first to share your experience with this product.
Submit a Review