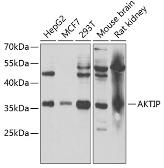 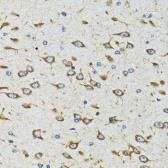 The mouse homolog of this gene produces fused toes and thymic hyperplasia in heterozygous mutant animals while homozygous mutants die in early development. This gene may play a role in apoptosis as these morphological abnormalities are caused by altered patterns of programmed cell death. The protein encoded by this gene is similar to the ubiquitin ligase domain of other ubiquitin-conjugating enzymes but lacks the conserved cysteine residue that enables those enzymes to conjugate ubiquitin to the target protein. This protein interacts directly with serine/threonine kinase protein kinase B (PKB)/Akt and modulates PKB activity by enhancing the phosphorylation of PKB's regulatory sites. Alternative splicing results in two transcript variants encoding the same protein. [provided by RefSeq, Jul 2008]
Show More +

There are currently no references for FTS antibody (GTX30041). Be the first to share your publications with this product.
Submit a Reference

There are currently no reviews for FTS antibody (GTX30041). Be the first to share your experience with this product.
Submit a Review
Newsletter