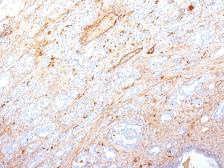 This MAb reacts with the cellular as well as plasma form of fibronectin. Reportedly, after iv administration, this MAb localizes to tumor vessels where it binds to the underlying basement. Epitope recognized by this antibody is not accessible in normal tissues to the circulating MAb indicating that it can be used to specifically target tumor vessels in vivo. TV-1 is reportedly useful for delivering vasoactive agents to tumors to induce increased vascular permeability or blood flow prior to treatment with chemotherapeutic drugs or MAbs.

0.2 mg/ml (Please refer to the vial label for the specific concentration.)

There are currently no references for Fibronectin antibody [SPM246] (GTX34728). Be the first to share your publications with this product.
Submit a Reference

There are currently no reviews for Fibronectin antibody [SPM246] (GTX34728). Be the first to share your experience with this product.
Submit a Review