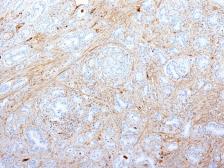 This MAb is directed against the peptide core and reacts with both the plasma and cellular forms of fibronectin. It blocks the fibronectin-medicated cell attachment not by disrupting the collagen-fibronectin interaction, but by interfering with the attachment of fibronectin to its receptor on the cell surface.

0.2 mg/ml (Please refer to the vial label for the specific concentration.)

Human fibronectin Purified from serum by affinity chromatography on gelatin-sepharose

There are currently no references for Fibronectin antibody [SPM539] (GTX34726). Be the first to share your publications with this product.
Submit a Reference

There are currently no reviews for Fibronectin antibody [SPM539] (GTX34726). Be the first to share your experience with this product.
Submit a Review
Newsletter