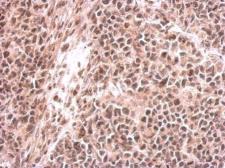 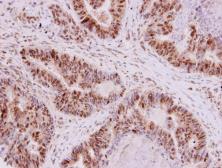 2.63 mg/ml (Please refer to the vial label for the specific concentration.)

Carrier-protein conjugated synthetic peptide encompassing a sequence within the N-terminus region of human G9a. The exact sequence is proprietary.

A cluster of genes, BAT1-BAT5, has been localized in the vicinity of the genes for TNF alpha and TNF beta. This gene is found near this cluster; it was mapped near the gene for C2 within a 120-kb region that included a HSP70 gene pair. These genes are all within the human major histocompatibility complex class III region. This gene was thought to be two different genes, NG36 and G9a, adjacent to each other but a recent publication shows that there is only a single gene. The protein encoded by this gene is thought to be involved in intracellular protein-protein interaction. There are three alternatively spliced transcript variants of this gene but only two are fully described. [provided by RefSeq]
Show More +