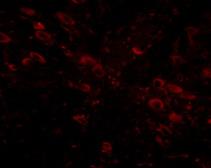 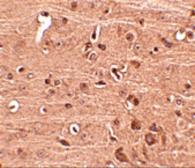 Gle1 antibody was raised against a 15 amino acid synthetic peptide near the carboxy terminus of human Gle1.The immunogen is located within amino acids 540 - 590 of Gle1.

This gene encodes a predicted 75-kDa polypeptide with high sequence and structure homology to yeast Gle1p, which is nuclear protein with a leucine-rich nuclear export sequence essential for poly(A)+RNA export. Inhibition of human GLE1L by microinjection of antibodies against GLE1L in HeLa cells resulted in inhibition of poly(A)+RNA export. Immunoflourescence studies show that GLE1L is localized at the nuclear pore complexes. This localization suggests that GLE1L may act at a terminal step in the export of mature RNA messages to the cytoplasm. Two alternatively spliced transcript variants encoding different isoforms have been found for this gene. [provided by RefSeq, Jul 2008]
Show More +

There are currently no references for GLE1 antibody (GTX31366). Be the first to share your publications with this product.
Submit a Reference

There are currently no reviews for GLE1 antibody (GTX31366). Be the first to share your experience with this product.
Submit a Review