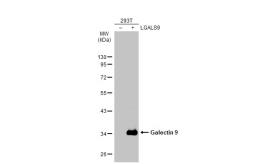 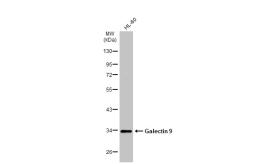 2.67 mg/ml (Please refer to the vial label for the specific concentration.)

Recombinant protein encompassing a sequence within the center region of human Galectin 9. The exact sequence is proprietary.

The galectins are a family of beta-galactoside-binding proteins implicated in modulating cell-cell and cell-matrix interactions. The protein encoded by this gene is an S-type lectin. It is overexpressed in Hodgkin's disease tissue and might participate in the interaction between the H&RS cells with their surrounding cells and might thus play a role in the pathogenesis of this disease and/or its associated immunodeficiency. Multiple alternatively spliced transcript variants have been found for this gene. [provided by RefSeq]
Show More +

There are currently no references for Galectin 9 antibody (GTX127353). Be the first to share your publications with this product.
Submit a Reference

There are currently no reviews for Galectin 9 antibody (GTX127353). Be the first to share your experience with this product.
Submit a Review