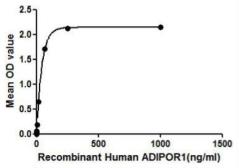 ADIPOR1 (Adiponectin receptor protein 1) is a receptor for ADP (30kDa adipocyte complement-related protein), an essential hormone secreted by adipocytes that regulates glucose and lipid metabolism. ADIPOQ-binding activates a signaling cascade that leads to increased AMPK activity, and ultimately to increased fatty acid oxidation, increased glucose uptake and decreased gluconeogenesis. Besides, human ADP and rat ADP exist similarities in amino acid sequence with the identity of 83.2% . Thus a binding ELISA assay was conducted to detect the interaction of recombinant human ADIPOR1 and recombinant rat ADP. Briefly, ADIPOR1 were diluted serially in PBS, with 0.01% BSA (pH 7.4). Duplicate samples of 100 μl were then transferred to ADP-coated microtiter wells and incubated for 2h at 37ºC. Wells were washed with PBST and incubated for 1h with anti-ADIPOR1 pAb, then aspirated and washed 3 times. After incubation with HRP labelled secondary antibody, wells were aspirated and washed 3 times. With the addition of substrate solution, wells were incubated 15-25 minutes at 37ºC. Finally, add 50 μl stop solution to the wells and read at 450nm immediately. The binding activity of of ADIPOR1 and ADP was in a dose dependent manner.

This gene encodes a protein which acts as a receptor for adiponectin, a hormone secreted by adipocytes which regulates fatty acid catabolism and glucose levels. Binding of adiponectin to the encoded protein results in activation of an AMP-activated kinase signaling pathway which affects levels of fatty acid oxidation and insulin sensitivity. A pseudogene of this gene is located on chromosome 14. Multiple alternatively spliced transcript variants have been found for this gene. [provided by RefSeq, Mar 2014]
Show More +

There are currently no references for Human Adiponectin Receptor 1 protein, His and GST tag (GTX00105-pro). Be the first to share your publications with this product.
Submit a Reference

There are currently no reviews for Human Adiponectin Receptor 1 protein, His and GST tag (GTX00105-pro). Be the first to share your experience with this product.
Submit a Review