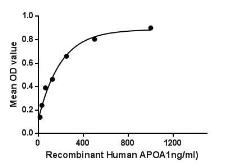 See all Apolipoprotein A1 protein products

Apolipoprotein A1 (APOA1) is the major protein component of HDL particles in plasma. It is a cofactor for lecithin cholesterolacyltransferase (LCAT) which is responsible for the formation of most plasma cholesteryl esters. ApoA1 was also isolated as a prostacyclin (PGI2) stabilizing factor, and thus may have an anticlotting effect. ApoA1 is often used as a biomarker for prediction of cardiovascular diseases. Besides, Haptoglobin (Hpt) has been identified as an interactor of APOA1, thus a binding ELISA assay was conducted to detect the interaction of recombinant human APOA1 and recombinant human Hpt. Briefly, APOA1 were diluted serially in PBS, with 0.01% BSA (pH 7.4). Duplicate samples of 100 μl were then transferred to Hpt-coated microtiter wells and incubated for 2h at 37ºC. Wells were washed with PBST and incubated for 1h with anti-APOA1 pAb, then aspirated and washed 3 times. After incubation with HRP labelled secondary antibody, wells were aspirated and washed 3 times. With the addition of substrate solution, wells were incubated 15-25 minutes at 37ºC. Finally, add 50 μl stop solution to the wells and read at 450nm immediately. The binding activity of APOA1 and Hpt was in a dose dependent manner.

This gene encodes apolipoprotein A-I, which is the major protein component of high density lipoprotein (HDL) in plasma. The encoded preproprotein is proteolytically processed to generate the mature protein, which promotes cholesterol efflux from tissues to the liver for excretion, and is a cofactor for lecithin cholesterolacyltransferase (LCAT), an enzyme responsible for the formation of most plasma cholesteryl esters. This gene is closely linked with two other apolipoprotein genes on chromosome 11. Defects in this gene are associated with HDL deficiencies, including Tangier disease, and with systemic non-neuropathic amyloidosis. Alternative splicing results in multiple transcript variants, at least one of which encodes a preproprotein. [provided by RefSeq, Dec 2015]
Show More +

There are currently no references for Human Apolipoprotein A1 protein (active) (GTX00221-pro). Be the first to share your publications with this product.
Submit a Reference

There are currently no reviews for Human Apolipoprotein A1 protein (active) (GTX00221-pro). Be the first to share your experience with this product.
Submit a Review
Newsletter