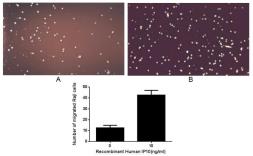 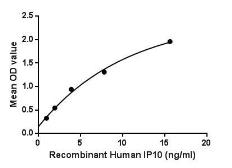 Interferon gamma-induced protein 10 (IP10) also known as C-X-C motif chemokine 10 (CXCL10) or small-inducible cytokine B10 is an 8. 7kDa protein that in humans is encoded by the CXCL10 gene. C-X-C motif chemokine 10 is a small cytokine belonging to the CXC chemokine family. IP10 secreted by several cell types in response to IFN-γ, has been attributed to several roles, such as chemoattraction for monocytes/macrophages, T cells, NK cells, and dendritic cells, promotion of T cell adhesion to endothelial cells, antitumor activity, and inhibition of bone marrow colony formation and angiogenesis. Besides, Insulin Like Growth Factor Binding Protein 7 (IGFBP7) has been identified as an interactor of IP10, thus a binding ELISA assay was conducted to detect the interaction of recombinant human IP10 and recombinant human IGFBP7. Briefly, VDR were diluted serially in PBS, with 0. 01% BSA (pH 7. 4). Duplicate samples of 100 μl were then transferred to IGFBP7-coated microtiter wells and incubated for 2h at 37ºC. Wells were washed with PBST and incubated for 1h with anti-IP10 pAb, then aspirated and washed 3 times. After incubation with HRP labelled secondary antibody, wells were aspirated and washed 3 times. With the addition of substrate solution, wells were incubated 15-25 minutes at 37ºC. Finally, add 50 μl stop solution to the wells and read at 450nm immediately. The binding activity of IP10 and IGFBP7 was in a dose dependent manner.
Chemotaxis  assay used 24-well microchemotaxis system was undertaken to detect the chemotactic effect of IP10 on the Raji cell line. Briefly, Raji cells were seeded into the upper chambers (150 μl cell suspension, 1x10⁶ cells/ml in RPMI-1640 with FBS free) and IP10 (1 ng/ml, 10 ng/ml, 100 ng/ml and 1000 ng/ml diluted separately in serum free RPMI-1640) was added in lower chamber with a polycarbonate filter (8μm pore size) used to separate the two compartments. After incubation at 37ºC with 5% CO₂ for 2h, the filter was removed, then cells in low chamber were observed by inverted microscope at low magnification (×100) and the number of migrated cells were counted at high magnification (×400) randomly. And IP10 is able to induce migration of Raji cells. The migrated Raji cells in low chamber at low magnification (×100) randomly, and the migrated cells were counted at high magnification (×400). The optimum chemotaxis of IP10 occurs at 10-100 ng/ml.

This antimicrobial gene encodes a chemokine of the CXC subfamily and ligand for the receptor CXCR3. Binding of this protein to CXCR3 results in pleiotropic effects, including stimulation of monocytes, natural killer and T-cell migration, and modulation of adhesion molecule expression. [provided by RefSeq, Sep 2014]
Show More +

There are currently no references for Human CXCL10 / IP10 protein, His tag (active) (GTX00242-pro). Be the first to share your publications with this product.
Submit a Reference

There are currently no reviews for Human CXCL10 / IP10 protein, His tag (active) (GTX00242-pro). Be the first to share your experience with this product.
Submit a Review