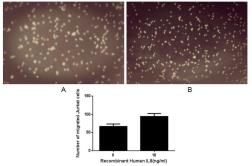 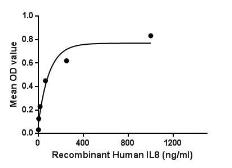 Interleukin 8 (IL8 or chemokine (C-X-C motif) ligand 8, CXCL8) is a chemokine produced by macrophages and other cell types such as epithelial cells, airway smooth muscle cellsendothelial cells.   IL-8, also known as neutrophil chemotactic factor, has two primary functions. It induces chemotaxis in target cells, primarily neutrophils but also other granulocytes, causing them to migrate toward the site of infection. IL8 also induces phagocytosis once they have arrived. IL8 is also known to be a potent promoter of angiogenesis. Besides, Syndecan 1 (SDC1) has been identified as an interactor of IL8, thus a binding ELISA assay was conducted to detect the interaction of recombinant human IL8 and recombinant human SDC1. Briefly, IL8 were diluted serially in PBS, with 0. 01% BSA (pH 7. 4). Duplicate samples of 100 μl were then transferred to SDC1-coated microtiter wells and incubated for 2h at 37ºC. Wells were washed with PBST and incubated for 1h with anti-IL8 pAb, then aspirated and washed 3 times. After incubation with HRP labelled secondary antibody, wells were aspirated and washed 3 times. With the addition of substrate solution, wells were incubated 15-25 minutes at 37ºC. Finally, add 50 μl stop solution to the wells and read at 450nm immediately. The binding activity of IL8 and SDC1 was in a dose dependent manner.
IL8 is a kind of neutrophil chemotactic factor, so chemotaxis  assay used 24-well microchemotaxis system was undertaken to detect the chemotactic effect of IL8 on the human T-lymphocyte leukemia cell line Jurkat. Briefly, Jurkat cells were seeded into the upper chambers (100 μl cell suspension, 1x10⁶cells/ml in RPMI-1640 with FBS free) and recombinant human IL8 (10 ng/ml, 100 ng/ml and 1000 ng/ml diluted separately in serum free RPMI-1640) was added in lower chamber with a polycarbonate filter (8μm pore size) used to separate the two compartments. After incubation at 37ºC with 5% CO₂ for 1h, the filter was removed, then cells in low chamber were observed by inverted microscope at low magnification (×100) and the number of migrated cells were counted at high magnification (×400) randomly. The migrated Jurkat cells in low chamber at low magnification (×100) randomly, and the migrated cells were counted at high magnification (×400). IL8 is able to induce migration of Jurkat cells, and the optimum chemotaxis of IL8 occurs at 10~100 ng/ml.

The protein encoded by this gene is a member of the CXC chemokine family and is a major mediator of the inflammatory response. The encoded protein is secreted primarily by neutrophils, where it serves as a chemotactic factor by guiding the neutrophils to the site of infection. This chemokine is also a potent angiogenic factor. This gene is believed to play a role in the pathogenesis of bronchiolitis, a common respiratory tract disease caused by viral infection. This gene and other members of the CXC chemokine gene family form a gene cluster in a region of chromosome 4q. [provided by RefSeq, Aug 2017]
Show More +

There are currently no references for Human CXCL8 / IL8 protein, His tag (active) (GTX00228-pro). Be the first to share your publications with this product.
Submit a Reference

There are currently no reviews for Human CXCL8 / IL8 protein, His tag (active) (GTX00228-pro). Be the first to share your experience with this product.
Submit a Review