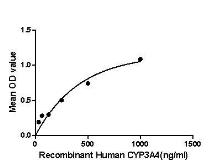 Cytochrome P450 3A4 (CYP3A4) is an important enzyme in the body, mainly found in the liver and in the intestine. It oxidizes small foreign organic molecules (xenobiotics), such as toxins or drugs, so that they can be removed from the body. CYP3A4 is a member of the cytochrome P450 family of oxidizing enzymes and the CYP3A4 is the most common and the most versatile one in drug metabolism. Besides, Heat Shock 70kDa Protein 8 (HSPA8) has been identified as an interactor of CYP3A4, thus a binding ELISA assay was conducted to detect the interaction of recombinant human CYP3A4 and recombinant human HSPA8. Briefly, CYP3A4 were diluted serially in PBS, with 0.01% BSA (pH 7.4). Duplicate samples of 100 μl were then transferred to HSPA8-coated microtiter wells and incubated for 2h at 37ºC. Wells were washed with PBST and incubated for 1h with anti-CYP3A4 pAb, then aspirated and washed 3 times. After incubation with HRP labelled secondary antibody, wells were aspirated and washed 3 times. With the addition of substrate solution, wells were incubated 15-25 minutes at 37ºC. Finally, add 50 μl stop solution to the wells and read at 450nm immediately. The binding activity of CYP3A4 and HSPA8 was in a dose dependent manner.

This gene encodes a member of the cytochrome P450 superfamily of enzymes. The cytochrome P450 proteins are monooxygenases that catalyze many reactions involved in drug metabolism and synthesis of cholesterol, steroids and other lipids. This protein localizes to the endoplasmic reticulum and its expression is induced by glucocorticoids and some pharmacological agents. This enzyme is involved in the metabolism of approximately half the drugs in use today, including acetaminophen, codeine, cyclosporin A, diazepam and erythromycin. The enzyme also metabolizes some steroids and carcinogens. This gene is part of a cluster of cytochrome P450 genes on chromosome 7q21.1. Previously another CYP3A gene, CYP3A3, was thought to exist; however, it is now thought that this sequence represents a transcript variant of CYP3A4. Alternatively spliced transcript variants encoding different isoforms have been identified. [provided by RefSeq, Feb 2011]
Show More +

There are currently no references for Human CYP3A4 protein, His tag (active) (GTX00198-pro). Be the first to share your publications with this product.
Submit a Reference

There are currently no reviews for Human CYP3A4 protein, His tag (active) (GTX00198-pro). Be the first to share your experience with this product.
Submit a Review
Literature 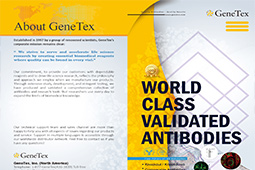