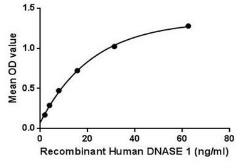 See all DNase I protein products

Deoxyribonuclease I (usually called DNase I) is a nonspecific endonuclease that cleaves DNA preferentially at phosphodiester linkages adjacent to a pyrimidine nucleotide, yielding 5'-phosphate-terminated polynucleotides with a free hydroxyl group on position 3', on average producing tetranucleotides. It acts on single-stranded DNA, double-stranded DNA, and chromatin. DNase I can be activated by bivalent metals such as Mg2 and Ca2 . This endonuclease enzyme is common reagents used in biochemical methods requiring diestion of DNA and recovery of RNA, or where DNA is to be removed without affecting structural proteins or enzymes. For example, DNase I is frequently used to remove template DNA following in vitro transcription, and to remove contaminating DNA in total RNA preparations (especially those from transfected cells that may contain plasmid DNA), used for ribonuclease protection assays, cDNA library contraction, and RT-PCR. Besides, Actin Beta (ACTb) has been identified as an interactor of DNase I, thus a binding ELISA assay was conducted to detect the interaction of recombinant human DNase I and recombinant human ACTb. Briefly, DNase I were diluted serially in PBS, with 0.01% BSA (pH 7.4). Duplicate samples of 100 μl were then transferred to ACTb-coated microtiter wells and incubated for 2h at 37ºC. Wells were washed with PBST and incubated for 1h with anti-DNase I pAb, then aspirated and washed 3 times. After incubation with HRP labelled secondary antibody, wells were aspirated and washed 3 times. With the addition of substrate solution, wells were incubated 15-25 minutes at 37ºC. Finally, add 50 μl stop solution to the wells and read at 450nm immediately. The binding activity of of DNase I and ACTb was in a dose dependent manner.

This gene encodes a member of the DNase family. This protein is stored in the zymogen granules of the nuclear envelope and functions by cleaving DNA in an endonucleolytic manner. At least six autosomal codominant alleles have been characterized, DNASE1*1 through DNASE1*6, and the sequence of DNASE1*2 represented in this record. Mutations in this gene have been associated with systemic lupus erythematosus (SLE), an autoimmune disease. A recombinant form of this protein is used to treat the one of the symptoms of cystic fibrosis by hydrolyzing the extracellular DNA in sputum and reducing its viscosity. Alternate transcriptional splice variants of this gene have been observed but have not been thoroughly characterized. [provided by RefSeq, Jul 2008]
Show More +

There are currently no references for Human DNase I protein (active) (GTX00172-pro). Be the first to share your publications with this product.
Submit a Reference

There are currently no reviews for Human DNase I protein (active) (GTX00172-pro). Be the first to share your experience with this product.
Submit a Review
Promotion