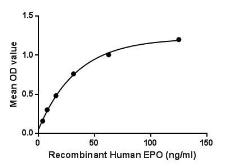 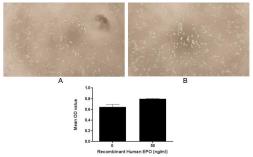 Erythropoietin (EPO), also known as hematopoietin or hemopoietin, is a glycoprotein cytokine secreted by the kidney in response to cellular hypoxia. Erythropoietin is an essential hormone for red blood cell production. Its primary effect on red blood cell progenitors and precursors (which are found in the bone marrow in humans) by promoting their survival through protecting these cells from apoptosis, or cell death. EPO is the primary erythropoietic factor that cooperates with various other growth factors involved in the development of erythroid lineage from multipotent progenitors. Besides, Erythropoietin Receptor (EPOR) has been identified as an interactor of EPO, thus a binding ELISA assay was conducted to detect the interaction of recombinant human EPO and recombinant human EPOR. Briefly, EPO were diluted serially in PBS, with 0.01% BSA (pH 7.4). Duplicate samples of 100 μl were then transferred to EPOR-coated microtiter wells and incubated for 2h at 37ºC. Wells were washed with PBST and incubated for 1h with anti-EPO pAb, then aspirated and washed 3 times. After incubation with HRP labelled secondary antibody, wells were aspirated and washed 3 times. With the addition of substrate solution, wells were incubated 15-25 minutes at 37ºC. Finally, add 50 μl stop solution to the wells and read at 450nm immediately. The binding activity of EPO and EPOR was in a dose dependent manner.
To test the effect of EPO on cell proliferation, TF-1 cells were seeded into triplicate wells of 96-well plates at a density of 5000 cells/well with 1% serum standard RPMI-1640  including various concentrations of recombinant human EPO. After incubated for 72h,  cells were observed by inverted microscope and cell proliferation was measured by Cell Counting Kit-8 (CCK-8). Briefly, 10 μl of CCK-8 solution was added to each well of the plate, then the absorbance at 450nm was measured using a microplate reader after incubating the plate for 1-4 hours at 37ºC. Proliferation of TF-1 cells after incubation with EPO for 72h observed by inverted microscope. Cell viability was assessed by CCK-8 (Cell Counting Kit-8 ) assay after incubation with recombinant EPO for 72h, and EPO significantly increased cell viability of TF-1 cells.

This gene encodes a secreted, glycosylated cytokine composed of four alpha helical bundles. The encoded protein is mainly synthesized in the kidney, secreted into the blood plasma, and binds to the erythropoietin receptor to promote red blood cell production, or erythropoiesis, in the bone marrow. Expression of this gene is upregulated under hypoxic conditions, in turn leading to increased erythropoiesis and enhanced oxygen-carrying capacity of the blood. Expression of this gene has also been observed in brain and in the eye, and elevated expression levels have been observed in diabetic retinopathy and ocular hypertension. Recombinant forms of the encoded protein exhibit neuroprotective activity against a variety of potential brain injuries, as well as antiapoptotic functions in several tissue types, and have been used in the treatment of anemia and to enhance the efficacy of cancer therapies. [provided by RefSeq, Aug 2017]
Show More +

There are currently no references for Human EPO protein, His tag (active) (GTX00251-pro). Be the first to share your publications with this product.
Submit a Reference

There are currently no reviews for Human EPO protein, His tag (active) (GTX00251-pro). Be the first to share your experience with this product.
Submit a Review
Newsletter