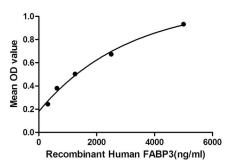 Fatty Acid Binding Protein 3, Muscle And Heart (FABP3) also known as mammary-derived growth inhibitor is a protein that in humans is encoded by the FABP3 gene. FABP3 is a small cytoplasmic protein (15kDa) released from cardiac myocytes following an ischemic episode. It is involved in active fatty acid metabolism where it transports fatty acids from the cell membrane to mitochondria for oxidation. Besides, Fatty Acid Binding Protein 3, Muscle And Heart (FABP3) has been identified as an interactor of SOD1, thus a binding ELISA assay was conducted to detect the interaction of recombinant human FABP3 and recombinant human SOD1. Briefly, FABP3 were diluted serially in PBS, with 0.01% BSA (pH 7.4). Duplicate samples of 100 μl were then transferred to SOD1-coated microtiter wells and incubated for 2h at 37ºC. Wells were washed with PBST and incubated for 1h with anti-FABP3 pAb, then aspirated and washed 3 times. After incubation with HRP labelled secondary antibody, wells were aspirated and washed 3 times. With the addition of substrate solution, wells were incubated 15-25 minutes at 37ºC. Finally, add 50 μl stop solution to the wells and read at 450nm immediately. The binding activity of FABP3 and SOD1 was in a dose dependent manner.

The intracellular fatty acid-binding proteins (FABPs) belongs to a multigene family. FABPs are divided into at least three distinct types, namely the hepatic-, intestinal- and cardiac-type. They form 14-15 kDa proteins and are thought to participate in the uptake, intracellular metabolism and/or transport of long-chain fatty acids. They may also be responsible in the modulation of cell growth and proliferation. Fatty acid-binding protein 3 gene contains four exons and its function is to arrest growth of mammary epithelial cells. This gene is a candidate tumor suppressor gene for human breast cancer. Alternative splicing results in multiple transcript variants. [provided by RefSeq, Mar 2016]
Show More +

There are currently no references for Human FABP3 protein (active) (GTX00275-pro). Be the first to share your publications with this product.
Submit a Reference

There are currently no reviews for Human FABP3 protein (active) (GTX00275-pro). Be the first to share your experience with this product.
Submit a Review
Promotion