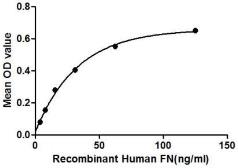 Fibronectin (FN) is a high-molecular weight (~440kDa) glycoprotein of the extracellular matrix that binds to membrane-spanning receptor proteins called integrins. Fibronectins bind cell surfaces and various compounds including collagen, fibrin, heparin, DNA, and actin. Fibronectin has numerous functions. For example, it involved in cell adhesion, cell motility, opsonization, wound healing, maintenance of cell shape, and so on. Besides, Connective Tissue Growth Factor (CTGF) has been identified as an interactor of FN, thus a binding ELISA assay was conducted to detect the interaction of recombinant human FN and recombinant human CTGF. Briefly, FN were diluted serially in PBS, with 0.01% BSA (pH 7.4). Duplicate samples of 100 μl were then transferred to CTGF-coated microtiter wells and incubated for 2h at 37ºC. Wells were washed with PBST and incubated for 1h with anti-FN pAb, then aspirated and washed 3 times. After incubation with HRP labelled secondary antibody, wells were aspirated and washed 3 times. With the addition of substrate solution, wells were incubated 15-25 minutes at 37ºC. Finally, add 50 μl stop solution to the wells and read at 450nm immediately. The binding activity of of FN and CTGF was in a dose dependent manner.

There are currently no references for Human Fibronectin protein (active) (GTX00166-pro). Be the first to share your publications with this product.
Submit a Reference

There are currently no reviews for Human Fibronectin protein (active) (GTX00166-pro). Be the first to share your experience with this product.
Submit a Review
Newsletter