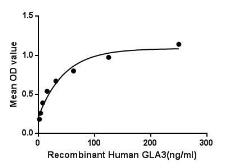 Galectin 3 (GAL3) is a member of the lectin family, of which 14 mammalian galectins have been identified. It is also a member of the beta-galactoside-binding protein family that plays an important role in cell-cell adhesion, cell-matrix interactions, macrophage activation, angiogenesis, metastasis, apoptosis. The protein also has been demonstrated to be involved in cancer, inflammation and fibrosis, heart disease, and stroke. GAL3 is expressed in the nucleus, cytoplasm, mitochondrion, cell surface, and extracellular space. Besides, Alpha-2-Heremans Schmid Glycoprotein (aHSG) has been identified as an interactor of GAL3, thus a binding ELISA assay was conducted to detect the interaction of recombinant human GAL3 and recombinant human aHSG. Briefly, GAL3 were diluted serially in PBS, with 0. 01% BSA (pH 7. 4). Duplicate samples of 100 μl were then transferred to aHSG-coated microtiter wells and incubated for 2h at 37ºC. Wells were washed with PBST and incubated for 1h with anti-GAL3 pAb, then aspirated and washed 3 times. After incubation with HRP labelled secondary antibody, wells were aspirated and washed 3 times. With the addition of substrate solution, wells were incubated 15-25 minutes at 37ºC. Finally, add 50 μl stop solution to the wells and read at 450nm immediately. The binding activity of GAL3 and aHSG was in a dose dependent manner.
GAL3 also can agglutinate red blood. In this case, we chose rabbit erythrocyte (RaE) to assay its ability of agglutination. A general procedure for hemagglutination assay (or haemagglutination assay; HA) is as follows, two-fold dilute the recombinant human GAL3 with 0. 01M PBS (pH 7. 4), add 50 μl a serial dilution of GAL3 to each well of a U or V- bottom shaped 96-well microtiter plate. The final well serves as a negative control with no GAL3, replace with 50 μl 0. 01M PBS. Then add 50 μl 1% rabbit erythrocyte to each well and mixed gently. The plate is incubated for 1-2 hours at room temperature. The minimal effective concentration of GAL3 is 1. 2μg/ml.

This gene encodes a member of the galectin family of carbohydrate binding proteins. Members of this protein family have an affinity for beta-galactosides. The encoded protein is characterized by an N-terminal proline-rich tandem repeat domain and a single C-terminal carbohydrate recognition domain. This protein can self-associate through the N-terminal domain allowing it to bind to multivalent saccharide ligands. This protein localizes to the extracellular matrix, the cytoplasm and the nucleus. This protein plays a role in numerous cellular functions including apoptosis, innate immunity, cell adhesion and T-cell regulation. The protein exhibits antimicrobial activity against bacteria and fungi. Alternate splicing results in multiple transcript variants.[provided by RefSeq, Oct 2014]
Show More +

There are currently no references for Human Galectin 3 protein, His tag (active) (GTX00195-pro). Be the first to share your publications with this product.
Submit a Reference

There are currently no reviews for Human Galectin 3 protein, His tag (active) (GTX00195-pro). Be the first to share your experience with this product.
Submit a Review