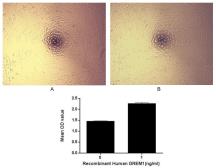 Gremlin (GREM1) is an inhibitor in the TGF beta signaling pathway. GREM1 and other BMP antagonists are important in the survival of cancer stroma survival and proliferation in some cancers. The protein expression is found in many cancers and is thought to play important roles in uterine cervix, lung, ovary, kidney, breast, colon, pancreas, and sarcoma carcinomas. A proliferation assay was conducted to detect the bioactivity of recombinant human GREM1 using A549 cells. Briefly,  A549 cells were seeded into triplicate wells of 96-well plates at a density of 5000 cells/well and allowed to attach, replaced with serum-free overnight, then the medium was replaced with 2% serum standard DMEM  prior to the addition of various concentrations of GREM1. After incubated for 96h,  cells were observed by inverted microscope and cell proliferation was measured by Cell Counting Kit-8 (CCK-8). Briefly, 10 μl of CCK-8 solution was added to each well of the plate, then the absorbance at 450nm was measured using a microplate reader after incubating the plate for 1-4 hours at 37ºC. Proliferation of A549 cells after incubation with GREM1 for 96h observed by inverted microscope. Cell viability was assessed by CCK-8 (Cell Counting Kit-8) assay after incubation with recombinant GREM1 for 96h that GREM1 significantly increased cell viability of A549 cells.

There are currently no references for Human Gremlin 1 protein, His tag (active) (GTX00210-pro). Be the first to share your publications with this product.
Submit a Reference

There are currently no reviews for Human Gremlin 1 protein, His tag (active) (GTX00210-pro). Be the first to share your experience with this product.
Submit a Review
Literature