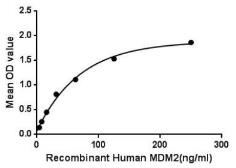 Mouse double minute 2 homolog (MDM2) also known as E3 ubiquitin-protein ligase Mdm2 is a cellular oncoprotein that recognizes the N-terminal trans-activation domain (TAD) of the p53 tumor suppressor and as an inhibitor of p53 transcriptional activation. The human homologue of this protein is sometimes called Hdm2. The p53 tumor suppressor is the key target of MDM2. It has been identified as a p53 interacting protein that represses p53 transcriptional activity and also acts as an E3 ubiquitin ligase, targeting both itself and p53 for degradation by the proteasome. MDM2 is capable of auto-polyubiquitination, and in complex with p300, a cooperating E3 ubiquitin ligase, is capable of polyubiquitinating p53. Besides, S100 Calcium Binding Protein (S100) has been identified as an interactor of MDM2, thus a binding ELISA assay was conducted to detect the interaction of recombinant human MDM2 and recombinant human S100. Briefly, MDM2 were diluted serially in PBS, with 0.01% BSA (pH 7.4). Duplicate samples of 100 μl were then transferred to S100-coated microtiter wells and incubated for 2h at 37ºC. Wells were washed with PBST and incubated for 1h with anti-MDM2 pAb, then aspirated and washed 3 times. After incubation with HRP labelled secondary antibody, wells were aspirated and washed 3 times. With the addition of substrate solution, wells were incubated 15-25 minutes at 37ºC. Finally, add 50 μl stop solution to the wells and read at 450nm immediately. The binding activity of of MDM2 and S100 was in a dose dependent manner.

This gene encodes a nuclear-localized E3 ubiquitin ligase. The encoded protein can promote tumor formation by targeting tumor suppressor proteins, such as p53, for proteasomal degradation. This gene is itself transcriptionally-regulated by p53. Overexpression or amplification of this locus is detected in a variety of different cancers. There is a pseudogene for this gene on chromosome 2. Alternative splicing results in a multitude of transcript variants, many of which may be expressed only in tumor cells. [provided by RefSeq, Jun 2013]
Show More +

There are currently no references for Human MDM2 protein (active) (GTX00176-pro). Be the first to share your publications with this product.
Submit a Reference

There are currently no reviews for Human MDM2 protein (active) (GTX00176-pro). Be the first to share your experience with this product.
Submit a Review
Pathways 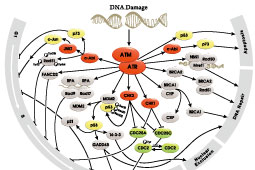 It is vital for cells to effectively repair DNA damage and to coordinate DNA repair with cell cycle progression.