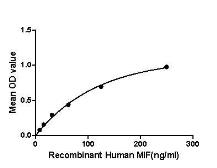 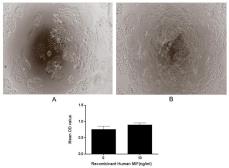 Macrophage migration inhibitory factor (MIF), also known as glycosylation- inhibiting factor (GIF), L-dopachrome isomerase, or phenylpyruvate tautomerase is a protein classified as an inflammatory cytokine. MIF is an important regulator of innate immunity. It involved in cell-mediated immunity, immunoregulation, and inflammation. MIF plays a role in the regulation of macrophage function in host defense through the suppression of anti-inflammatory effects of glucocorticoids. This lymphokine and the JAB1 protein form a complex in the cytosol near the peripheral plasma membrane, which may indicate a role in integrin signaling pathways. Besides, Major Histocompatibility Complex Class II Invariant Chain (MHCDG) has been identified as an interactor of MIF, thus a binding ELISA assay was conducted to detect the interaction of recombinant human MIF and recombinant human MHCDG. Briefly, MIF were diluted serially in PBS, with 0. 01% BSA (pH 7.4). Duplicate samples of 100 μl were then transferred to MHCDG- coated microtiter wells and incubated for 2h at 37ºC. Wells were washed with PBST and incubated for 1h with anti-MIF pAb, then aspirated and washed 3 times. After incubation with HRP labelled secondary antibody, wells were aspirated and washed 3 times. With the addition of substrate solution, wells were incubated 15-25 minutes at 37ºC. Finally, add 50 μl stop solution to the wells and read at 450nm immediately. The binding activity of MIF and MHCDG was in a dose dependent manner.
Macrophage migration inhibitory factor (MIF or MMIF), is a lymphokine involved in cell-mediated immunity, immunoregulation, and inflammation. MIF contains two motifs with catalytic activity. The first is a 27 amino acid motif located at the N-terminus functions as a phenylpyruvate tautomerase. MIF also contains a Cys-Ala-Leu-Cys catalytic site between residues 57 and 60 that appears to function as a disulfide reductase. Besides, MIF is overexpressed in various tumors and has been suggested as a molecular link between chronic inflammation and cancer. To measured the effect of MIF on cell proliferation, breast cancer MCF-7 cells were seeded into triplicate wells of 96-well plates at a density of 5000 cells/well and allowed to attach, replaced with serum-free overnight, then the medium was replaced with 1% serum standard DMEM  prior to the addition of various concentrations of recombinant human MIF. After incubated for 96h,  cells were observed by inverted microscope and cell proliferation was measured by Cell Counting Kit-8 (CCK-8). Briefly, 10 μl of CCK-8 solution was added to each well of the plate, then the absorbance at 450nm was measured using a microplate reader after incubating the plate for 1-4 hours at 37ºC. Proliferation of MCF-7 cells after incubation with MIF for 96h observed by inverted microscope. Cell viability was assessed by CCK-8 assay after incubation with recombinant MIF for 96h. And MIF significantly increased cell viability of MCF-7 cells.

This gene encodes a lymphokine involved in cell-mediated immunity, immunoregulation, and inflammation. It plays a role in the regulation of macrophage function in host defense through the suppression of anti-inflammatory effects of glucocorticoids. This lymphokine and the JAB1 protein form a complex in the cytosol near the peripheral plasma membrane, which may indicate an additional role in integrin signaling pathways. [provided by RefSeq, Jul 2008]
Show More +

There are currently no references for Human MIF protein, His tag (active) (GTX00196-pro). Be the first to share your publications with this product.
Submit a Reference

There are currently no reviews for Human MIF protein, His tag (active) (GTX00196-pro). Be the first to share your experience with this product.
Submit a Review