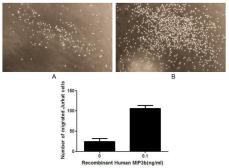 Macrophage Inflammatory Protein 3 Beta (MIP3b) is a small cytokine belonging to the CC chemokine family that is also known as EBI1 ligand chemokine (ELC) and Chemokine C-C motif ligand 19 (CCL19). This chemokine elicits its effects on its target cells by binding to the chemokine receptor chemokine receptor CCR7. It attracts certain cells of the immune system, including dendritic cells and antigen-engaged B cells, CCR7 central-memory T-Cells. Thus, chemotaxis assay used 24-well microchemotaxis system was undertaken to detect the chemotactic effect of recombinant human MIP3b on the Jurkat cell line. Briefly, Jurkat cells were seeded into the upper chambers (150 μl cell suspension,10⁶ cells/ml in RPMI-1640 with FBS free) and MIP3b (0.01, 0.1, 1, 10, 100, and 1000 ng/ml diluted separately in serum free RPMI-1640) was added in lower chamber with a polycarbonate filter (8 μm pore size) used to separate the two compartments. After incubation at 37ºC with 5% CO₂ for 3h, the filter was removed, then cells in low chamber were observed by inverted microscope at low magnification (×100) and the number of migrated cells were counted at high magnification (×400) randomly (five fields for each filter). MIP3b is able to induce migration of Jurkat cells, and the migrated cells were counted at high magnification (×400). The optimum chemotaxis of recombinant human MIP3b occurs at 0.1-1 ng/ml.

This antimicrobial gene is one of several CC cytokine genes clustered on the p-arm of chromosome 9. Cytokines are a family of secreted proteins involved in immunoregulatory and inflammatory processes. The CC cytokines are proteins characterized by two adjacent cysteines. The cytokine encoded by this gene may play a role in normal lymphocyte recirculation and homing. It also plays an important role in trafficking of T cells in thymus, and in T cell and B cell migration to secondary lymphoid organs. It specifically binds to chemokine receptor CCR7. [provided by RefSeq, Sep 2014]
Show More +

There are currently no references for Human MIP3 beta protein (active) (GTX00424-pro). Be the first to share your publications with this product.
Submit a Reference

There are currently no reviews for Human MIP3 beta protein (active) (GTX00424-pro). Be the first to share your experience with this product.
Submit a Review
Newsletter