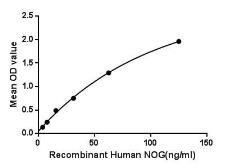 Noggin, also known as NOG, is a protein that is involved in the development of many body tissues, including nerve tissue, muscles, and bones. Noggin is a signaling molecule that plays an important role in promoting somite patterning in the developing embryo. It is released from the notochord and regulates bone morphogenic protein (BMP4) during development. It also causes formation of the head and other dorsal structures. Besides, Growth Differentiation Factor 5 (GDF5) has been identified as an interactor of NOG, thus a binding ELISA assay was conducted to detect the interaction of recombinant human NOG and recombinant human CDF5. Briefly, NOG were diluted serially in PBS with 0.01% BSA (pH 7.4). Duplicate samples of 100 μl were then transferred to CDF5-coated microtiter wells and incubated for 2h at 37ºC. Wells were washed with PBST and incubated for 1h with anti-NOG pAb, then aspirated and washed 3 times. After incubation with HRP labelled secondary antibody, wells were aspirated and washed 3 times. With the addition of substrate solution, wells were incubated 15-25 minutes at 37ºC. Finally, add 50 μl stop solution to the wells and read at 450nm immediately. The binding activity of NOG and CDF5 was in a dose dependent manner.

The secreted polypeptide, encoded by this gene, binds and inactivates members of the transforming growth factor-beta (TGF-beta) superfamily signaling proteins, such as bone morphogenetic protein-4 (BMP4). By diffusing through extracellular matrices more efficiently than members of the TGF-beta superfamily, this protein may have a principal role in creating morphogenic gradients. The protein appears to have pleiotropic effect, both early in development as well as in later stages. It was originally isolated from Xenopus based on its ability to restore normal dorsal-ventral body axis in embryos that had been artificially ventralized by UV treatment. The results of the mouse knockout of the ortholog suggest that it is involved in numerous developmental processes, such as neural tube fusion and joint formation. Recently, several dominant human NOG mutations in unrelated families with proximal symphalangism (SYM1) and multiple synostoses syndrome (SYNS1) were identified; both SYM1 and SYNS1 have multiple joint fusion as their principal feature, and map to the same region (17q22) as this gene. All of these mutations altered evolutionarily conserved amino acid residues. The amino acid sequence of this human gene is highly homologous to that of Xenopus, rat and mouse. [provided by RefSeq, Jul 2008]
Show More +

There are currently no references for Human Noggin protein (active) (GTX00263-pro). Be the first to share your publications with this product.
Submit a Reference

There are currently no reviews for Human Noggin protein (active) (GTX00263-pro). Be the first to share your experience with this product.
Submit a Review
Promotion