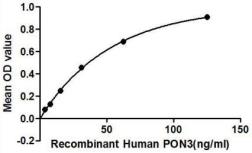 Paraoxonase 3 (PON3) is secreted into the bloodstream and associates with high-density lipoprotein (HDL). PON3 also rapidly hydrolyzes lactones and can inhibit the oxidation of low-density lipoprotein, a function that is believed to slow the initiation and progression of atherosclerosis. Besides, Paraoxonase 1 (PON1) has been identified as an interactor of PON3, thus a binding ELISA assay was conducted to detect the interaction of recombinant human PON3 and recombinant human PON1. Briefly, PON3 were diluted serially in PBS, with 0.01% BSA (pH 7.4). Duplicate samples of 100 μl were then transferred to PON1-coated microtiter wells and incubated for 2h at 37ºC. Wells were washed with PBST and incubated for 1h with anti-PON3 pAb, then aspirated and washed 3 times. After incubation with HRP labelled secondary antibody, wells were aspirated and washed 3 times. With the addition of substrate solution, wells were incubated 15-25 minutes at 37ºC. Finally, add 50 μl stop solution to the wells and read at 450nm immediately. The binding activity of of PON3 and PON1 was in a dose dependent manner.

This gene is a member of the paraoxonase family and lies in a cluster on chromosome 7 with the other two family members. The encoded protein is secreted into the bloodstream and associates with high-density lipoprotein (HDL). The protein also rapidly hydrolyzes lactones and can inhibit the oxidation of low-density lipoprotein (LDL), a function that is believed to slow the initiation and progression of atherosclerosis. Alternatively spliced variants which encode different protein isoforms have been described; however, only one has been fully characterized. [provided by RefSeq, Jul 2008]
Show More +

There are currently no references for Human PON3 protein (active) (GTX00164-pro). Be the first to share your publications with this product.
Submit a Reference

There are currently no reviews for Human PON3 protein (active) (GTX00164-pro). Be the first to share your experience with this product.
Submit a Review
Newsletter 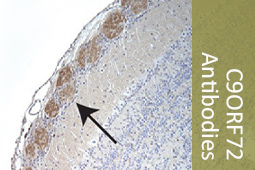