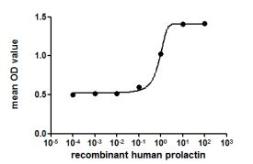 PRL (prolactin), also known as luteotropin, is a hormone secreted from the pituitary gland and is best known for its role in enabling mammals to produce milk. PRL plays an essential role in metabolism, regulation of the immune system. According to reports, PRL also stimulates proliferation of certain cells, including MCF-7. Thus, proliferation assay of PRL was conducted using MCF-7 cells. Briefly,  MCF-7 cells were seeded into triplicate wells of 96-well plates at a density of 2000 cells/well and allowed to attach overnight, then the medium was replaced with serum-free standard DMEM   prior to the addition of various concentrations of PRL. After incubated for 72h,   cells were observed by inverted microscope and cell proliferation was measured by Cell Counting Kit-8 (CCK-8). Briefly, 10 μl of CCK-8 solution was added to each well of the plate, then the absorbance at 450nm was measured using a microplate reader after incubating the plate for 1-4 hours at 37ºC. Cell proliferation of MCF-7 cells after stimulated with PRL. And PRL significantly promoted cell proliferation of MCF-7 cells. The ED₅₀ for this effect is typically 3. 709-8. 973 ng/ml

This gene encodes the anterior pituitary hormone prolactin. This secreted hormone is a growth regulator for many tissues, including cells of the immune system. It may also play a role in cell survival by suppressing apoptosis, and it is essential for lactation. Alternative splicing results in multiple transcript variants that encode the same protein. [provided by RefSeq, Aug 2011]
Show More +

There are currently no references for Human Prolactin protein (active) (GTX00069-pro). Be the first to share your publications with this product.
Submit a Reference

There are currently no reviews for Human Prolactin protein (active) (GTX00069-pro). Be the first to share your experience with this product.
Submit a Review
Promotion