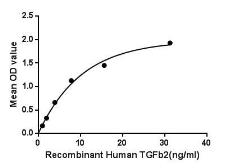 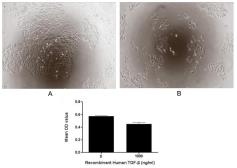 Transforming growth factor beta (TGF-β) is a multifunctional cytokine belonging to the transforming growth factor superfamily. The TGF-β superfamily includes endogenous growth inhibiting proteins; an increase in expression of TGF-β often correlates with the malignancy of many cancers and a defect in the cellular growth inhibition response to TGF-β. Its immunosuppressive functions then come to dominate, contributing to oncogenesis. To test the effect of TGF-β on inhibit HGF-dependent proliferation, HepG2 cells were seeded into triplicate wells of 96-well plates at a density of 2000 cells/well and allowed to attach, replaced with serum-free overnight, then the medium was replaced with 2% serum standard DMEM including 1 ng/ml HGF prior to the addition of various concentrations of recombinant human TGF-β. After incubated for 96h, cells were observed by inverted microscope and cell proliferation was measured by Cell Counting Kit-8 (CCK-8). Briefly, 10 μl of CCK-8 solution was added to each well of the plate, then the absorbance at 450nm was measured using a microplate reader after incubating the plate for 1-4 hours at 37ºC. The inhibitory effect of TGF-β on HGF-dependent proliferation of HepG2 cells observed by inverted microscope. Cell viability was assessed by CCK-8 assay after incubation with recombinant TGF-β for 96h. And TGF-β significantly decreased cell viability of HepG2 cells.
Transforming growth factor-beta 2 (TGFb2) is a secreted protein known as a cytokine that performs many cellular functions and has a vital role during embryonic development. It is an extracellular glycosylated protein. It is known to suppress the effects of interleukin dependent T-cell tumors. There are two named isoforms of this protein, created by alternative splicing of the same gene. Besides, Amyloid Precursor Protein (APP) has been identified as an interactor of TGFb2, thus a binding ELISA assay was conducted to detect the interaction of recombinant human TGFb2 and recombinant human APP. Briefly, TGFb2 were diluted serially in PBS, with 0.01% BSA (pH 7.4). Duplicate samples of 100 μl were then transferred to APP-coated microtiter wells and incubated for 2h at 37ºC. Wells were washed with PBST and incubated for 1h with anti-TGFb2 pAb, then aspirated and washed 3 times. After incubation with HRP labelled secondary antibody, wells were aspirated and washed 3 times. With the addition of substrate solution, wells were incubated 15-25 minutes at 37ºC. Finally, add 50μL stop solution to the wells and read at 450nm immediately. The binding activity of TGFb2 and APP was in a dose dependent manner.

This gene encodes a secreted ligand of the TGF-beta (transforming growth factor-beta) superfamily of proteins. Ligands of this family bind various TGF-beta receptors leading to recruitment and activation of SMAD family transcription factors that regulate gene expression. The encoded preproprotein is proteolytically processed to generate a latency-associated peptide (LAP) and a mature peptide, and is found in either a latent form composed of a mature peptide homodimer, a LAP homodimer, and a latent TGF-beta binding protein, or in an active form consisting solely of the mature peptide homodimer. The mature peptide may also form heterodimers with other TGF-beta family members. Disruption of the TGF-beta/SMAD pathway has been implicated in a variety of human cancers. A chromosomal translocation that includes this gene is associated with Peters' anomaly, a congenital defect of the anterior chamber of the eye. Mutations in this gene may be associated with Loeys-Dietz syndrome. This gene encodes multiple isoforms that may undergo similar proteolytic processing. [provided by RefSeq, Aug 2016]
Show More +

There are currently no references for Human TGF beta 2 protein, His tag (active) (GTX00211-pro). Be the first to share your publications with this product.
Submit a Reference

There are currently no reviews for Human TGF beta 2 protein, His tag (active) (GTX00211-pro). Be the first to share your experience with this product.
Submit a Review