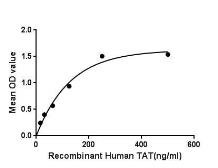 Tyrosine aminotransferase (TAT) is an enzyme present in the liver and catalyzes the conversion of tyrosine to 4-hydroxyphenylpyruvate. In humans, the tyrosine aminotransferase protein is encoded by the TAT gene. A deficiency of the enzyme in humans can result in what is known as Type II Tyrosinemia, wherein there is an abundance of tyrosine as a result of tyrosine failing to undergo an aminotransferase reaction to form 4-hydroxyphenylpyruvate. Tyrosine Aminotransferase as a dimer has two identical active sights. Lys280 is attached to PLP, which is held in place via two nonpolar amino acid side chains; phenylalanine and isoleucine (see thumbnail on right). The PLP is also held in place by hydrogen bonding to surrounding molecules mainly by its phosphate group. Besides, Heat Shock 70kDa Protein 8 (HSPA8) has been identified as an interactor of TAT, thus a binding ELISA assay was conducted to detect the interaction of recombinant human TAT and recombinant human HSPA8. Briefly, TAT were diluted serially in PBS, with 0.01% BSA (pH 7.4). Duplicate samples of 100 μl were then transferred to HSPA8-coated microtiter wells and incubated for 2h at 37ºC. Wells were washed with PBST and incubated for 1h with anti-TAT pAb, then aspirated and washed 3 times. After incubation with HRP labelled secondary antibody, wells were aspirated and washed 3 times. With the addition of substrate solution , wells were incubated 15-25 minutes at 37ºC. Finally, add 50 μl stop solution to the wells and read at 450nm immediately. The binding activity of TAT and HSPA8 was in a dose dependent manner.

This nuclear gene encodes a mitochondrial protein tyrosine aminotransferase which is present in the liver and catalyzes the conversion of L-tyrosine into p-hydroxyphenylpyruvate. Mutations in this gene cause tyrosinemia (type II, Richner-Hanhart syndrome), a disorder accompanied by major skin and corneal lesions, with possible cognitive disability. A regulator gene for tyrosine aminotransferase is X-linked. [provided by RefSeq, Jul 2008]
Show More +

There are currently no references for Human Tyrosine Aminotransferase protein (active) (GTX00184-pro). Be the first to share your publications with this product.
Submit a Reference

There are currently no reviews for Human Tyrosine Aminotransferase protein (active) (GTX00184-pro). Be the first to share your experience with this product.
Submit a Review