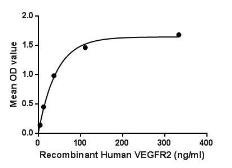 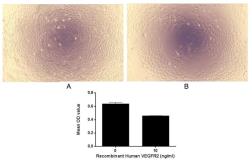 Vascular Endothelial Growth Factor Receptor 2 (VEGFR2) also known as kinase insert domain receptor is a VEGF receptor. There are three main subtypes of VEGFR, numbered 1, 2 and 3. All members of the VEGF family stimulate cellular responses by binding to VEGF receptors on the cell surface, causing them to dimerize and become activated through transphosphorylation. VEGFR2 appears to mediate almost all of the known cellular responses to VEGF. Besides, vascular Endothelial Growth Factor C (VEGFC) has been identified as an interactor of VEGFR2, thus a binding ELISA assay was conducted to detect the interaction of recombinant human VEGFR2 and recombinant human VEGFC. Briefly, VEGFR2 were diluted serially in PBS, with 0. 01% BSA (pH 7. 4). Duplicate samples of 100 μl were then transferred to VEGFC-coated microtiter wells and incubated for 2h at 37ºC. Wells were washed with PBST and incubated for 1h with anti-VEGFR2 pAb, then aspirated and washed 3 times. After incubation with HRP labelled secondary antibody, wells were aspirated and washed 3 times. With the addition of substrate solution, wells were incubated 15-25 minutes at 37ºC. Finally, add 50 μl stop solution to the wells and read at 450nm immediately. The binding activity of VEGFR2 and VEGFC was in a dose dependent manner.
Vascular Endothelial Growth Factor Receptor 2 (VEGFR2) also known as kinase insert domain receptor acts as a cell-surface receptor for VEGFA, VEGFC and VEGFD. VEGFR2 functions as the primary mediator of Vascular endothelial growth factor activation in endothelial cells. regulation of VEGFR-2 expression appears critical in mitogenesis, differentiation, and angiogenesis. To test the effect on inhibit the VEGF-dependent proliferation of endothelium cells, ECV-304 cells were seeded into triplicate wells of 96-well plates at a density of 5000 cells/well and allowed to attach, replaced with serum-free overnight, then the medium was replaced with 2% serum standard DMEM including 1μg/ml Vascular Endothelial Growth Factor C (VEGFC) and various concentrations of recombinant human VEGFR2. After incubated for 96h, cells were observed by inverted microscope and cell proliferation was measured by Cell Counting Kit-8 (CCK-8). Briefly, 10 μl of CCK-8 solution was added to each well of the plate, then the absorbance at 450nm was measured using a microplate reader after incubating the plate for 1-4 hours at 37ºC. Proliferation of ECV-304 cells after incubation with VEGFR2 for 96h observed by inverted microscope. Cell viability was assessed by CCK-8 (Cell Counting Kit-8 ) assay after incubation with recombinant VEGFR2 for 96h. And VEGFR2 significantly inhibit cell viability of ECV-304.

Vascular endothelial growth factor (VEGF) is a major growth factor for endothelial cells. This gene encodes one of the two receptors of the VEGF. This receptor, known as kinase insert domain receptor, is a type III receptor tyrosine kinase. It functions as the main mediator of VEGF-induced endothelial proliferation, survival, migration, tubular morphogenesis and sprouting. The signalling and trafficking of this receptor are regulated by multiple factors, including Rab GTPase, P2Y purine nucleotide receptor, integrin alphaVbeta3, T-cell protein tyrosine phosphatase, etc.. Mutations of this gene are implicated in infantile capillary hemangiomas. [provided by RefSeq, May 2009]
Show More +

There are currently no references for Human VEGF Receptor 2 protein, His tag (active) (GTX00258-pro). Be the first to share your publications with this product.
Submit a Reference

There are currently no reviews for Human VEGF Receptor 2 protein, His tag (active) (GTX00258-pro). Be the first to share your experience with this product.
Submit a Review