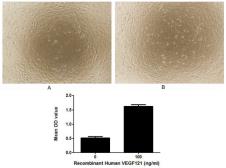 VEGFA (Vascular endothelial growth factor A) is a growth factor and can be cleaved into several isoforms, including VEGF121. It induces endothelial cell proliferation, promotes cell migration, inhibits apoptosis and induces permeabilization of blood vessels. It is accepted that the VEGF121 isoform stimulates the proliferation of vein endothelial cells. Thus, proliferation assay of recombinant human VEGF121 was conducted using ECV-304 cells. Briefly, ECV-304 cells were seeded into triplicate wells of 96-well plates at a density of 2000 cells/well and allowed to attach overnight, then the medium was replaced with serum-free standard RPMI-1640  prior to the addition of various concentrations of VEGF121. After incubated for 48h,  cells were observed by inverted microscope and cell proliferation was measured by Cell Counting Kit-8 (CCK-8). Briefly, 10 μl of CCK-8 solution was added to each well of the plate, then the absorbance at 450nm was measured using a microplate reader after incubating the plate for 1-4 hours at 37ºC. Proliferation of ECV-304 cells after incubation with VEGF121 for 48h observed by inverted microscope. Cell viability was assessed by CCK-8 (Cell Counting Kit-8 ) assay after incubation with human recombinant VEGF121 for 48h. And VEGF121 significantly increased cell viability of ECV-304 cells.

There are currently no references for Human VEGF121 protein, His tag (active) (GTX00136-pro). Be the first to share your publications with this product.
Submit a Reference

There are currently no reviews for Human VEGF121 protein, His tag (active) (GTX00136-pro). Be the first to share your experience with this product.
Submit a Review
Newsletter