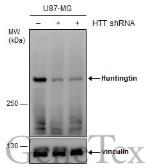 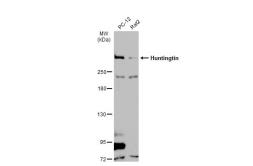 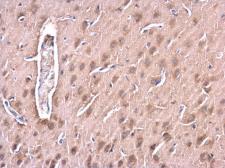 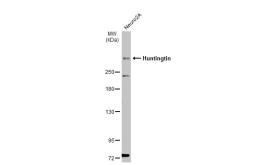 1.4 mg/ml (Please refer to the vial label for the specific concentration.)

Carrier-protein conjugated synthetic peptide encompassing a sequence within the N-terminus region of human Huntingtin. The exact sequence is proprietary.

Huntingtin is a disease gene linked to Huntington's disease, a neurodegenerative disorder characterized by loss of striatal neurons. This is thought to be caused by an expanded, unstable trinucleotide repeat in the huntingtin gene, which translates as a polyglutamine repeat in the protein product. A fairly broad range in the number of trinucleotide repeats has been identified in normal controls, and repeat numbers in excess of 40 have been described as pathological. The huntingtin locus is large, spanning 180 kb and consisting of 67 exons. The huntingtin gene is widely expressed and is required for normal development. It is expressed as 2 alternatively polyadenylated forms displaying different relative abundance in various fetal and adult tissues. The larger transcript is approximately 13.7 kb and is expressed predominantly in adult and fetal brain whereas the smaller transcript of approximately 10.3 kb is more widely expressed. The genetic defect leading to Huntington's disease may not necessarily eliminate transcription, but may confer a new property on the mRNA or alter the function of the protein. One candidate is the huntingtin-associated protein-1, highly expressed in brain, which has increased affinity for huntingtin protein with expanded polyglutamine repeats. This gene contains an upstream open reading frame in the 5' UTR that inhibits expression of the huntingtin gene product through translational repression. [provided by RefSeq]
Show More +

There are currently no references for Huntingtin antibody (GTX132433). Be the first to share your publications with this product.
Submit a Reference

There are currently no reviews for Huntingtin antibody (GTX132433). Be the first to share your experience with this product.
Submit a Review