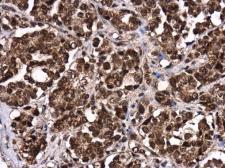 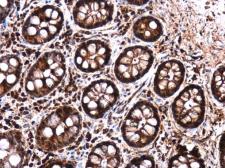 0.51 mg/ml (Please refer to the vial label for the specific concentration.)

Recombinant protein encompassing a sequence within the center region of human LIN28B. The exact sequence is proprietary.

Acts as a suppressor of microRNA (miRNA) biogenesis by specifically binding the precursor let-7 (pre-let-7), a miRNA precursor. Acts by binding pre-let-7 and recruiting ZCCHC11/TUT4 uridylyltransferase, leading to the terminal uridylation of pre-let-7. Uridylated pre-let-7 miRNAs fail to be processed by Dicer and undergo degradation. Specifically recognizes the 5'-GGAG-3' motif in the terminal loop of pre-let-7. Also recognizes and binds non pre-let-7 pre-miRNAs that contain the 5'-GGAG-3' motif in the terminal loop, leading to their terminal uridylation and subsequent degradation. Mediates MYC-mediated let-7 repression. Isoform 1, when overexpressed, stimulates growth of the breast adenocarcinoma cell line MCF-7. Isoform 2 has no effect on cell growth.
Show More +

There are currently no references for LIN28B antibody (GTX131546). Be the first to share your publications with this product.
Submit a Reference

There are currently no reviews for LIN28B antibody (GTX131546). Be the first to share your experience with this product.
Submit a Review
Newsletter