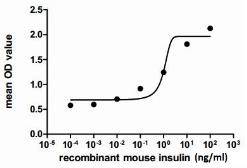 INS (Insulin) is a peptide hormone produced by beta cells of the pancreatic islets, which decreases blood glucose concentration and increases cell permeability to monosaccharides, amino acids and fatty acids. It has been reported that insulin triggers phosphorylation of a number of substrates by binding to its receptors, which was important for cell proliferation, cell cycle progression, cell division and differentiation. To detect the effect of Insulin on cell proliferation,  MCF-7 cells were seeded into triplicate wells of 96-well plates at a density of 2000 cells/well and allowed to attach overnight, then the medium was replaced with serum-free standard DMEM  prior to the addition of various concentrations of INS. After incubated for 48h,  cells were observed by inverted microscope and cell proliferation was measured by Cell Counting Kit-8 (CCK-8). Briefly, 10 μl of CCK-8 solution was added to each well of the plate, then the absorbance at 450nm was measured using a microplate reader after incubating the plate for 1-4 hours at 37ºC. The dose-effect curve showed INS significantly promoted cell proliferation of MCF-7 cells. The ED₅₀ for this effect is typically 11. 71-57. 11 ng/ml.

This gene encodes insulin, a peptide hormone that plays a vital role in the regulation of carbohydrate and lipid metabolism. The encoded precursor protein undergoes proteolytic cleavage to produce a disulfide-linked heterodimeric functional protein that is stored in secretory granules. An increase in blood glucose levels, among others, induces the release of insulin from the secretory granules. Mice deficient in the functional hormone encoded by this gene develop diabetes mellitus. Alternative splicing results in multiple transcript variants. [provided by RefSeq, Aug 2015]
Show More +

There are currently no references for Mouse Insulin protein, His tag (active) (GTX00291-pro). Be the first to share your publications with this product.
Submit a Reference

There are currently no reviews for Mouse Insulin protein, His tag (active) (GTX00291-pro). Be the first to share your experience with this product.
Submit a Review