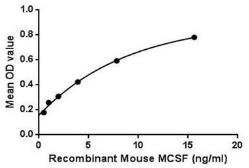 Macrophage Colony Stimulating Factor (M-CSF), also known as CSF-1,is a secreted cytokine which influences hematopoietic stem cells to differentiate into macrophages or other related cell types. M-CSF (or CSF-1) is a hematopoietic growth factor that is involved in the proliferation, differentiation, and survival of monocytes, macrophages, and bone marrow progenitor cells. It can also affects macrophages and monocytes in several ways, including stimulating increased phagocytic and chemotactic activity, and increased tumour cell cytotoxicity. The role of M-CSF is not only restricted to the monocyte/macrophage cell lineage. By interacting with its membrane receptor (CSF1R or M-CSF-R encoded by the c-fms proto-oncogene), M-CSF also modulates the proliferation of earlier hematopoietic progenitors and influence numerous physiological processes involved in immunology, metabolism, fertility and pregnancy. Besides, Colony Stimulating Factor Receptor, Macrophage (M-CFS-R) has been identified as an interactor of M-CSF, thus a binding ELISA assay was conducted to detect the interaction of recombinant mouse M-CSF and recombinant mouse MCFSR Briefly, M-CSF were diluted serially in PBS, with 0.01% BSA (pH 7.4). Duplicate samples of 100 μl were then transferred to M-CFS-R-coated microtiter wells and incubated for 2h at 37ºC. Wells were washed with PBST and incubated for 1h with anti-M-CSF pAb, then aspirated and washed 3 times. After incubation with HRP labelled secondary antibody, wells were aspirated and washed 3 times. With the addition of substrate solution, wells were incubated 15-25 minutes at 37ºC. Finally, add 50 μl stop solution to the wells and read at 450nm immediately. The binding activity of of M-CSF and M-CFS-R was in a dose dependent manner.

There are currently no references for Mouse M-CSF protein, His tag (GTX00336-pro). Be the first to share your publications with this product.
Submit a Reference

There are currently no reviews for Mouse M-CSF protein, His tag (GTX00336-pro). Be the first to share your experience with this product.
Submit a Review