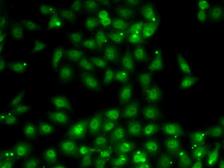 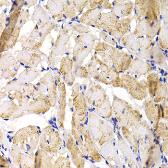 This gene encodes a member of the muscleblind protein family which was initially described in Drosophila melanogaster. The encoded protein is a C3H-type zinc finger protein that modulates alternative splicing of pre-mRNAs. Muscleblind proteins bind specifically to expanded dsCUG RNA but not to normal size CUG repeats and may thereby play a role in the pathophysiology of myotonic dystrophy. Mice lacking this gene exhibited muscle abnormalities and cataracts. Several alternatively spliced transcript variants have been described but the full-length natures of only some have been determined. The different isoforms are thought to have different binding specificities and/or splicing activities. [provided by RefSeq, Sep 2015]
Show More +

There are currently no references for Muscleblind-like 1 antibody (GTX33335). Be the first to share your publications with this product.
Submit a Reference

There are currently no reviews for Muscleblind-like 1 antibody (GTX33335). Be the first to share your experience with this product.
Submit a Review