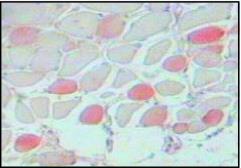 Monoclonal Anti-Myosin (Skeletal, Slow) recognizes an epitope located on the heavy meromyosin portion of human adult skeletal muscle slow myosin. Cross-reactivity has been observed with human, bovine, sheep, goat, porcine, dog, cat, rabbit, hamster, guinea pig, rat, mouse, and chicken. In rat, the product is highly specific for the slow myosin heavy chain of adult skeletal muscle. It does not react with the fast myosin heavy chain. It does not cross-react with embryonic or neonatal rat skeletal myosins, nor with cat fetal/embryonic skeletal myosin. Using immunohistochemical staining, the antibody reacts with human adult type I skeletal muscle fibers and with cardiac muscle cells. It also reacts faintly with adult human C-Fibers, co-expressing myosin heavy chain I and IIa in variable ratios. The product shows no reactivity with human or rat adult smooth muscle or with non-muscle tissues.

Myosin is a 480 kDa protein known to interact with actin in muscle and in non muscle cells. It contains two identical heavy chains (200 kDa each) and four light chains (15-26 kDa). Myosin molecules consist of two major regions: tail (rod) and heads; they aggregate into filaments through the tail region and interact with actin and with ATP through the head region. Multiple forms of myosin heavy chains exist for each muscle type: skeletal, cardiac, smooth and in non muscle. Myosin isoforms exist in different types of skeletal muscle, depending on the physiological function of the muscle. Mammalian muscle fibers are classified primarily into slow (I), fast-red (IIa) and fast-white (IIb) major types.4,9,10 Changes in the speed of muscle contraction brought about by neural influences result from changes in the pattern of expression of myosin and other myofibrillar genes. Myosin heavy chains are encoded by a multigene family which is developmentally regulated. During differentiation of future muscles, fibers sequentially express heavy chain genes for embryonic, neonatal and adult myosin. Developing muscles express two isoforms of myosin, the embryonic and fetal (neonatal) forms, which are also encoded for by distinct heavy chain genes. The embryonic and fetal myosins have a high calcium-activated ATPase activity at alkaline pH; fibers that contain these myosins are therefore likely to appear similar, histochemically, to mature Type II fibers, even though the latter contain qualitatively distinct mature fast isomyosins. In the neonate, the principal myosin in developing fast and slow muscles is fetal myosin. During the first few weeks of life, fetal myosin is replaced by slow myosin in slow muscle and by fast myosins in fast muscle. There are three adult forms of skeletal myosin corresponding to the three types of muscle fibers. The heavy chains of these myosins are distinct, and are encoded by different heavy chain genes. Muscle fiber type classification for type I and type II fibers has long been applied to the histological study of both normal and pathological human skeletal muscle. Studies of myosin isoforms expression in developing skeletal muscle also provide information about the control of gene expression in different muscle types by neural, hormonal and other factors. The advent of myosin immunocytochemistry, using antibodies to specific myosin heavy chains, has made it possible to trace the developmental history of the complex paths of myosin changes at the cellular level. Antibodies are also important because of the clues they may give concerning the pathogenesis of abnormalities in diseased muscle fibers. Monoclonal antibodies that recognize epitopes peculiar to a particular developmental or mature isomyosin may be used to identify these isomyosins and thus to characterize the temporal pattern of their expression in different fibers during myogenesis.
Show More +