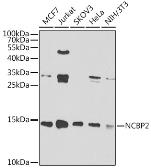 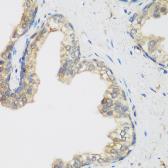 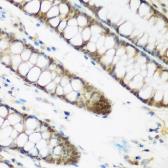 The product of this gene is a component of the nuclear cap-binding protein complex (CBC), which binds to the monomethylated 5' cap of nascent pre-mRNA in the nucleoplasm. The encoded protein has an RNP domain commonly found in RNA binding proteins, and contains the cap-binding activity. The CBC promotes pre-mRNA splicing, 3'-end processing, RNA nuclear export, and nonsense-mediated mRNA decay. Multiple transcript variants encoding different isoforms have been found for this gene. [provided by RefSeq, Jul 2008]
Show More +

There are currently no references for NCBP2 antibody (GTX33345). Be the first to share your publications with this product.
Submit a Reference

There are currently no reviews for NCBP2 antibody (GTX33345). Be the first to share your experience with this product.
Submit a Review